The Bartlett Aquatic Center will have alternate hours June 22, 29, 30, and July 4 of 11am-5pm; June 18 12noon-7pm, and July 30 11am-4pm.
Turbo Turtle Race Thursday, June 30 at 7pm. Join in the fun! Get your Tix for $10 Bartlett Parks Foundation (turtlerace.org) and be in the running for prizes.
July 4th: Registration Office, Administration Building, Parks Department, and Nature Center closed. LIFECENTER & Splash open 5:30-11am. BAC open 11am-5pm.

Teams will play a 6 week regular season followed by an end of the season playoff for the top teams. Teams will play a match of 3 games each week and each game will count towards their record. Leagues will consist of one match each week for 6 weeks followed by an end of the season tournament. Games are played 6 on 6 with a minimum of 2 females. Prizes will be awarded to the championship team. 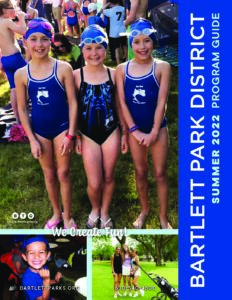